Clint Waltz, The University of Georgia

The survey obtained estimates of the inventory for bermudagrass, zoysiagrass, centipedegrass, St. Augustinegrass, and tall fescue based on estimated sales for the first five months of 2019 as excellent (more than 10% of demand), adequate (equal to demand), and poor (more than 10% shortage).  Pricing information included farm price and price for truckload orders to the Atlanta area or within 100 miles of the farm, all costs were reported as price per square foot of sod. 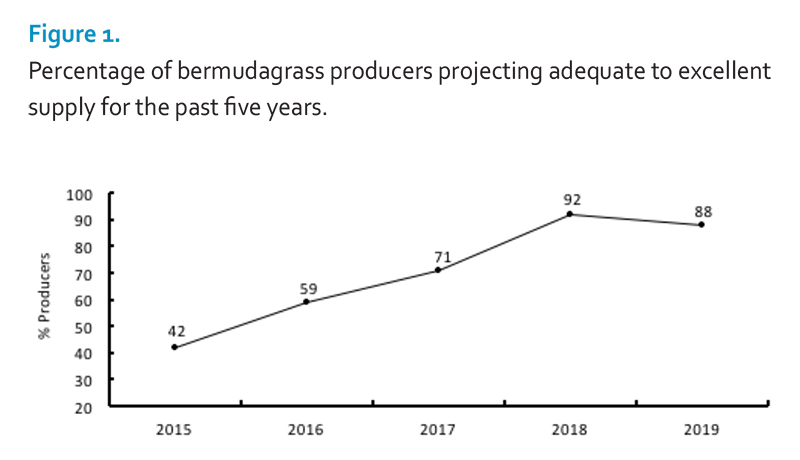 According to this year’s survey, the number of producers growing zoysiagrass (76%) was similar to previous years.  Zoysiagrass is a popular species with many commercially available cultivars.  There are at least sixteen zoysiagrass cultivars being grown in Georgia.  Of the producers responding, 69% estimate an adequate to excellent inventory, which is lower than last year’s estimate (Figure 2). 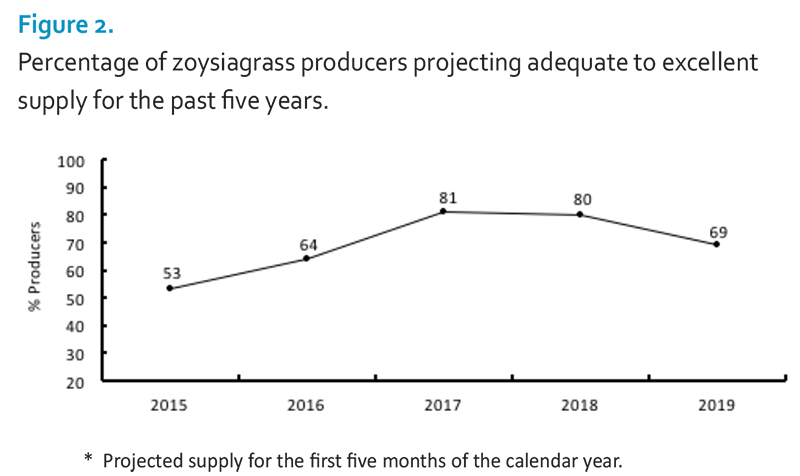 Of the 17 producers surveyed 10 (59%) were growers of centipedegrass.  Eighty percent of the growers had adequate to excellent inventory compared to 75% in 2018, and 60% in 2017.  Of the larger growers, 3 of 5 growers with greater than 600 acres expect an excellent to adequate centipedegrass supply.

St. Augustinegrass is being grown by 4 of the 17 producers surveyed.  Half reported a sufficient supply. 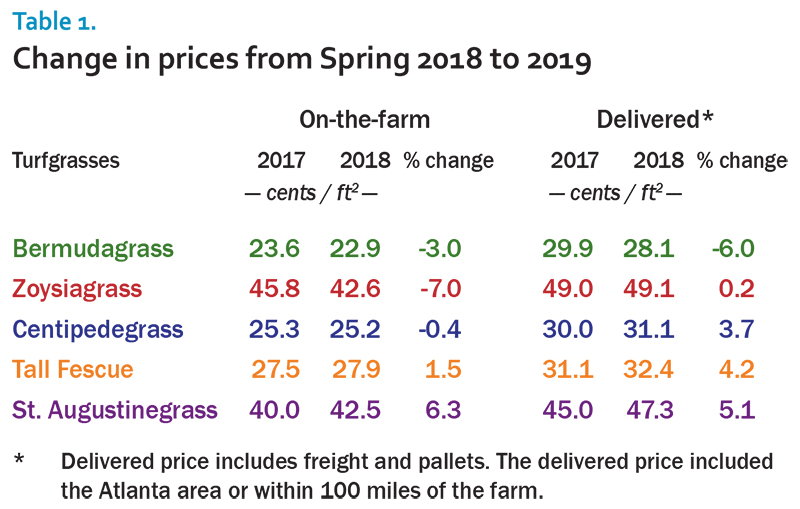 For 2019, the on-the-farm and delivered prices are expected to remain relatively unchanged or decrease compared to 2018 and 2017.  Price drops could range from 3% to 7% over last year’s prices (Table 1).  Of the five species, only St. Augustinegrass is forecast to have a noticeably higher price than in 2018.  Figure 3 provides a five-year perspective of sod prices. 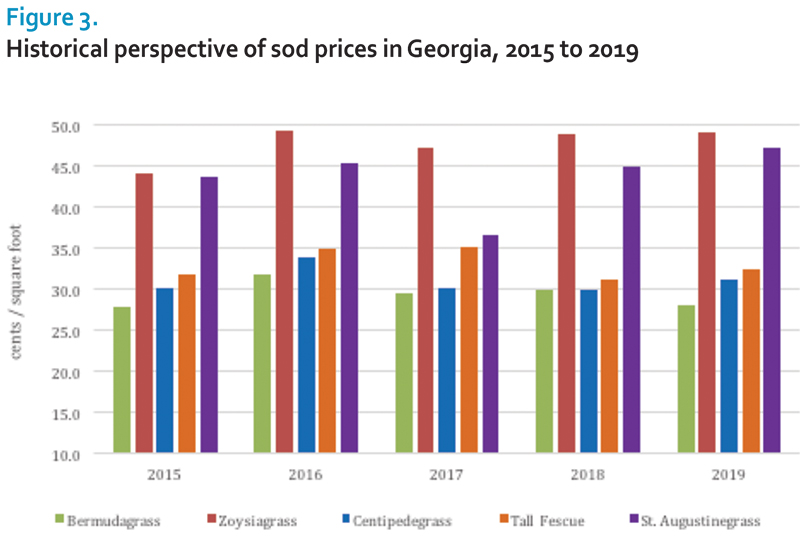 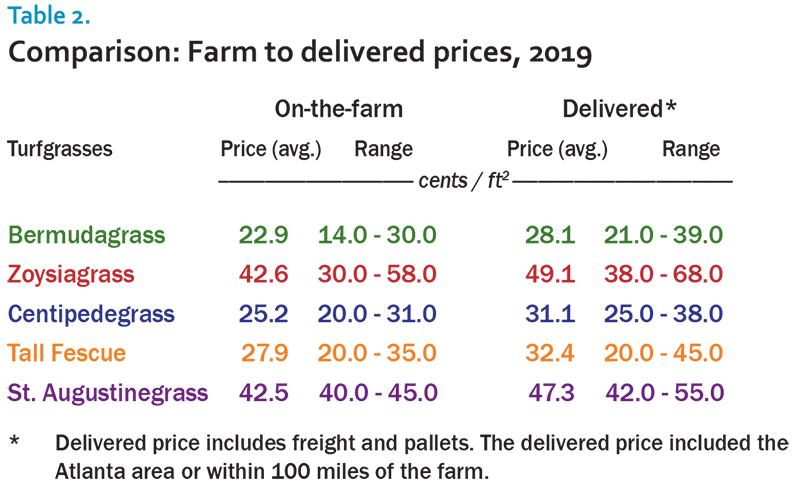 Regarding grower price expectations, growers are not forecasting a significant price increase in 2019.  Sixty-five percent of bermudagrass producers expect steady prices while 18% foresee a price decrease during the first five months of 2019.  This is a similar to last year and price data from this year’s survey, indicates growers forecast are relatively accurate.  For zoysiagrass, 64% of producers anticipate stable prices during the first five months of 2019; 36% of producers forecast higher prices, one with greater than 900 acres in total production.  For centipedegrass and tall fescue, greater than 70% of all producers expect prices to remain constant in 2019.  St. Augustinegrass producers expect unchanging prices throughout 2019. 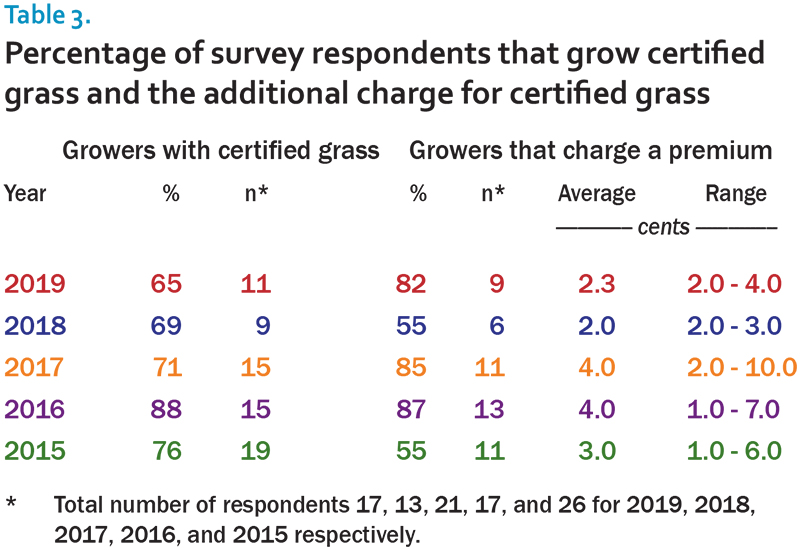 2019 had 11 producers representing 65% of the respondents with some certified grass on their farm (Table 3).  Eighty-two percent of these growers charge a premium for certified grass.  The remaining growers either do not place an added value on certified sod or do not participate in the certification program.  In 2019, the typical extra cost ranged from 2.0 to 4.0 cents per square foot and averaged 2.3 cents.  This translates to between $10.00 and $20.00 on a 500 square foot pallet.

The price point where consumers (i.e. industry practitioners and homeowners) value varietal purity is unknown.  Anecdotal estimates – informal survey of a several hundred participants – of homeowners and end-consumers suggests the value of a certified grass is likely greater than reported in this year’s survey.  When told of the benefits of certified sod, end-users indicated they are willing to pay more (e.g. $20 to $25 / 500 square foot pallet) to ensure varietal purity. 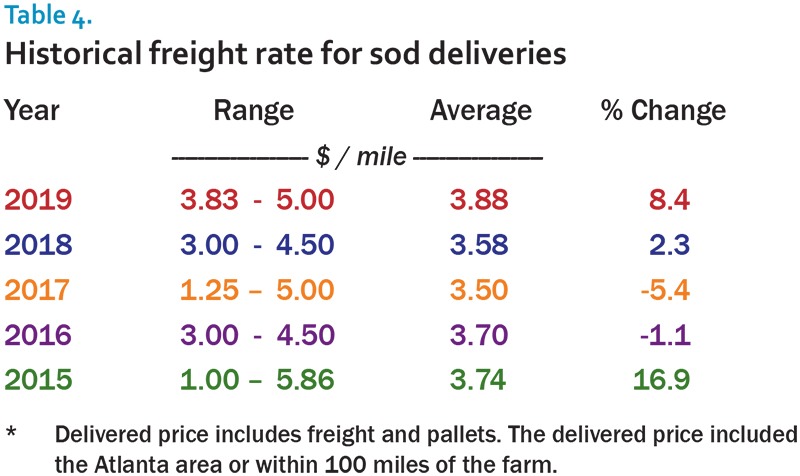 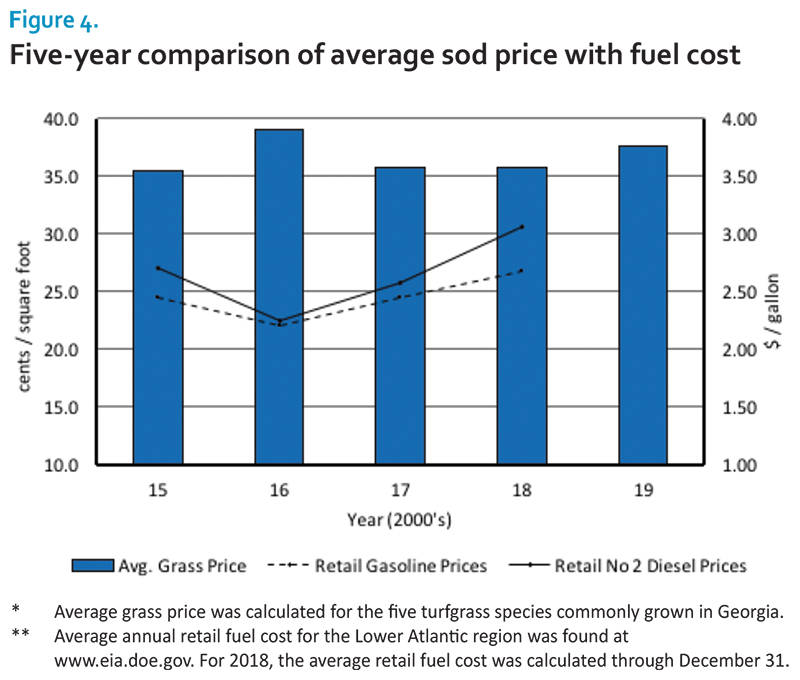 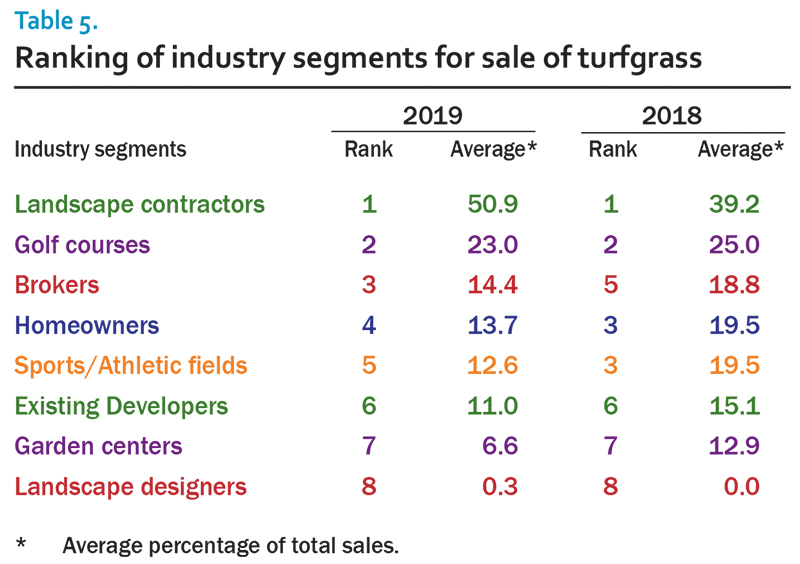 The 17 producers that participated in this survey estimated that half the grass sold was to landscape contractors (Table 5).  This industry segment continues to be the perennial leader.  In 2019, golf courses remained in the second position.  Brokers have a 2-year trend of increasing in rank from the previous year.

In 2018, only one producer indicated they planned to add acres into production.  This year, seven producers indicate they may increase their production.  The cumulative total increase is approximately 500 acres.  Comparing the responses from this survey with the UGA Agribusiness and Economic Development 2017 Farm Gate Value Report (http://www.caes.uga.edu/content/caes-subsite/caed/publications/farm-gate.html), the increases in production are in close agreement.

2019 will be a third consecutive year of steady sod prices.  Similarly, inventory for all warm-season species is expected to meet market demand during the first part of 2019.  Fuel prices are rising; which could put pressure on costs of production and delivery, altering the expectation of consistent sod prices throughout 2019.